We have endured the separation of earth and sky and then we encountered innumerable splits and cracks. I look sideways to see you. I wonder how you have survived these events. But where I look, I do not see you. I call you: no answer. Are you and I separated during one of these innumerable divisions? 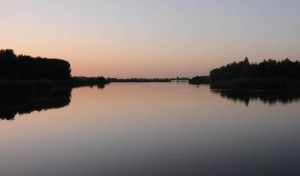 For the first time on our Odyssey, we are not together. Strange. But the divisions have not stopped: I too fall apart. My consciousness reduces, my eyes are cloudy and sounds disappear. Everything fades.

Your narrator continues: “In their quest to “Who are you” – after the separation of earth and sky – the two main characters have disappeared in the course of the countless divisions. Temporarily, they may not report their experiences. Your narrator continues the story of the Odyssey. My name – Narrator – I have received a long time ago. My name originates from the word “nara” [3] meaning “people”, and “tr” [4] meaning “cross or pass”. As a narrator I will tell you the events until the two main characters will be able to tell their story again.”

“After the primal separation and the following endless splits, everything is broken into infinite small particles. Of course there is still some order between these particles – or at least a start of order. But these connections are beyond our comprehension. And if we can apprehend it, we can not express it in words. According to our notion of time in Western society, it takes several billions of years from the separation of earth and sky until we again have a beginning of life. Or was this period much shorter? Several thousand years according to the Bible, or a flash of the eyes? Narrator does not know. Your narrator – in her/his contemporary appearance – was not present at the beginning of the universe and also not at the beginning of the Bible. However, your narrator is constantly amazed that after a flash of the eyes, the world still exists. The two main characters will recount their experiences with the perception of time on a next stage during their Odyssey. ”

“After the complete collapse of “One” in infinitely many pieces, order is recreated. Mankind [5] is still investigating how this order is established and how long it took before the subsequences organisations of life emerged. The stories of discovery and development of life can occupy the rest of my life. Your narrator will – like my designation implies – transfer you to the point that “You and I” reappear when conditions permit human life again.”

“The following post includes the outcome of the first organisation.”

[3] In Sanskrit this word consists of “na” meaning “not”, and the root “ra” meaning “rejoice”; “nara” means ordinary man or woman. In the name “narrator” the plural for “men” is used: “narâ”.

[5] “Man” means “think, conscience” in Sanskrit. People try to become aware of our past and to get hold of former experiences. Vanity, vanity, everything is vanity? Your narrator does not know.