This translation by Red Pine – Bill Porter – of the Tao Te Ching in 2009 is among the best available.
It is a revised version of the edition published in 1996.

Both versions start with:

The way that becomes a way
Is not the immortal Way

A footnote states that Tao originally meant “Moon”. This may well be the Moon as pointer to the All-encompassing One, wherein this Moon and pointer are fully encompassed as waves in the ocean.

Also highly recommended are the translations by:
– Ellen M. Chen – with different interpretations for several verses
– Jonathan Star – also including an interpretation per Chinese character

One Robe, One Bowl: The Zen Poetry of Ryokan by John Stevens

This translation and introduction by John Stevens is highly recommended for its beauty. It is also a marvellous introduction to the way of living of the Japanese hermit-monk Ryokan

One example: after returning to his small hut – metaphor for clinging to his earthly ego? – Ryokan noticed that all was gone, he composed the haiku:

The thief left behind
the moon
At the window.

Another translation of this haiku:

The thief leaves behind,
the ever changeful Moon
at the firmament

Moon is often used to refer to Tao; it also indicates the firm belief of Ryokan.

Memories of a Marriage by Louis Begley
My rating: 4 of 5 stars

In “Memories of a marriage” by Louis Begley, a writer – named Philip – in his seventies reconnects with an old friend – named Lucy – whom he met right out of college and hasn’t seen for 40 years. Both main characters are from the East Coast privileged class: their capital acquired by their forefathers from one crime (slave-trade) or another. As parvenus their kind spend their life in luxury in places to be in Europe and at the East Coast.

Lucy once a beautiful woman with the world at her feet, has become a bitter divorce who fully puts the blame on her former husband Thomas. She has married Thomas – the son of a garage owner – after she has lost the opportunity for a good marriage with candidates from her own class after a few too many overtly sexual relations with Philip and many of his peers. Thomas became a very successful and well to do banker in Wall street, but he could never meet the parvenu’s class culture in the opinion of Lucy (never wear black shoes before the evening).

Philip is now a widower – having lost his beloved wife to cancer – and one day he runs into Lucy who is now divorced from Thomas who had died several years before. Lucy starts telling her side of what had happened in her marriage: all very negative toward Thomas. Unable to believe Lucy’s side, that is besides his own memory and admiration of Thomas and Lucy, Philip begins an investigation as preparation for a novel by asking questions to Lucy – who gives intimate details of her marriage to Thomas – and by questioning others who have known Thomas and Lucy as a couple.

Very well written although a small part in the middle – used to speed up the storyline – is slightly out of tone. In case this small part would be fully elaborated in the same style and the plotting slightly improved, this book might deserve five stars.

A History of Religious Ideas 3: From Muhammad to the Age of Reforms by Mircea Eliade
My rating: 5 of 5 stars

The third volume of “A History of Religious Idea – From Muhammed to the Age of Reforms” by Mircea Eliade covers the vast religious area between:
• Religions of Ancient Eurasia including shamanism, paganism, and the “Celestial God”
• Christian Churches in the eighth and ninth century
• Muhammed and the unfolding of Islam
• Western Catholicism from Charlemagne to the start of the Reformation
• Judaism in the Middle Ages
• Zwingli, Calvin and the Catholic Reformation
• Tibetan Religions

Similar to the first two volumes, this vast area of religious ideas is described in a considerable depth in this third volume, although experts will certainly notice significant major omissions at once; e.g. the Reformation in Holland is not covered.

Although I have the impression that Mircea Eliade could not finish this third volume: highly recommended!

Language Shock: Understanding the Culture of Conversation by Michael H. Agar
My rating: 0 of 5 stars

Michael Agar shows in his book “Language Shock: Understanding the Culture of Conversation” the interaction between language, culture and daily behaviour for insiders and outsiders. Insiders know implicit (and explicit) the meaning behind words and sentences that outsiders with only knowledge of a language may not be aware of. He shares his open mind for several environments/cultures wherein he has lived. He makes a strong plea for open mindedness to a foreign cultures otherwise unknown/uncommon behaviour may be regarded as a defect in another culture resulting in rejection or worse.

Michael uses a organic/lingering style with many personal examples. This style has its merits and its shortcomings.

Conclusion: recommended – a readable introduction to foreign combination of language/culture and way of living

A History of Religious Ideas 2: From Gautama Buddha to the Triumph of Christianity by Mircea Eliade
My rating: 5 of 5 stars

The second volume of “A History of Religious Idea – From Gautama Buddha to the Triumph of Christianity” by Mircea Eliade covers the vast religious area between:

This vast area of religious ideas is described in a considerable depth, although experts will certainly notice significant omissions at once; e.g. the Upanishads and the Mahabharata deserve more attention.

A History of Religious Ideas 1: From the Stone Age to the Eleusinian Mysteries by Mircea Eliade
My rating: 5 of 5 stars

In volume I of “A History of Religious Ideas”, Mircea Eliade opens on page 5 with explanation of a ritual of “mystical solidarity” from the Stone Age, that I have not read anywhere else.
In this ritual hunter-gatherers see the blood of the prey as similar in every respect to their blood; and by killing the prey they identify themselves with their prey for two reasons. They seek redemption for the sin of killing their prey, and they identify with their prey to maintain their unique system of survival for both hunter and prey. This ritual – altered, revalorised and camouflaged – is still within our modern society.

This paragraph shed a different light on the many kinds of charity that captains of industry perform in the later part of their life.

This first volume continues with an abundance of religious developments of mankind in the Indo-European society until the Dionysiac festivals.

A must read to get an overview of the religious ideas with one remark: ideas unknown to me are covered in depth, but religious ideas that I have studied before, are described more superficial; but this remark says more about me as a reader than about the content of the book.

The Mind of Clover: Essays in Zen Buddhist Ethics by Robert Aitken
My rating: 5 of 5 stars

“The Mind of Clover – Essays in Zen Buddhist Ethics” starts with chapters on the ten precepts for Buddhist.

In the chapter on the second precept “Not Stealing”, Robert Aitken cites Unto Tähtinen:

“There are two ways of avoiding war: one way is to satisfy everyone’s desire, the other way is to content oneself with the good. The former is not possible due to the limitations of the world and therefore there remains this second alternative of contentment”

And then he cites Mahatma Gandhi:

“In India we have many millions of people who have to be satisfied with only one meal a day. This meal consists of a chapati containing no fat and a pinch of salt. You and I have no right to anything until these millions of people are better fed and clothed. You and I ought to know better and adjust our wants, and even undergo voluntarily starvation in order that they may be nursed, fed and clothed.”

So true in our contemporary Western world full of abundance.

This small books continues with essays on the Mind, and Robert Aitken cites from the Diamond Sutra: 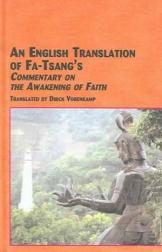 An English Translation of Fa-Tsang’s Commentary on the Awakening of Faith by Fazang
My rating: 5 of 5 stars

At once this description creates a problem, because emptiness is unspeakable by lack of features and because the capabilities of features and functions, that arise in interdependence and reciprocity, are infinite. We cannot put it into words – it is an entry into the inconceivable – and maybe we should conclude with Wittgenstein at this point: “Wovon man nicht sprechen kann, darüber muss man schweigen“ (Whereof one cannot speak, thereof one must keep silent)”.

The introduction to the commentary on the “Awakening of Faith” continues with the structure of consciousness, explained in a bird’s eye view.

When the first three forms of thought are also based in the emptiness of “Thusness”-consciousness, then these forms may be a basis for Buddhist enlightenment. The last two forms are the onset for the discrimination of things.

The ability to discrimination leads to awareness of separate phenomena:
• Consciousness of suffering and joy
• Based on desires that come out of suffering and joy, objects get shape
• When objects are shaped, names – including symbols and letters – arise for objects
• Based on names and symbols, actions arise with “cause and effect”
• Connected with actions, suffering (and joy) arises.

Then the introduction continues with an explanation of degenerate forms of consciousness that originate in a combination of a desire to illusions, symbols, acts, etc.

After this introductions follows the translation of “Commentary on the Awakening of Faith”.

The copy I received from the publisher, was accompanied with a bookmarker mentioning the makers of the book!

Highly recommended for a further study of the Hua-Yen branche of Zen Buddhism.

Six Memos For The Next Millennium by Italo Calvino
My rating: 5 of 5 stars

“Six Memos For The Next Millennium” by Italo Calvino is a collection of five Charles Eliot Norton Lectures written in 1985/1986 about what should be cherished in literature with intriguing titles:
1 – Lightness,
2 – Quickness,
3 – Exactitude,
4 – Visibility,
5 – Multiplicity
and the never written memo “6 – Consistency”.

The third memo by Italo Calvino – Exactitude – begins as follows:

“For the ancient Egyptians exactitude was symbolised by a feather, that served as a weight on scales used for the weighing of the Soul. This light feather was called “Maat” (also the Dutch word for measure) – Goddess of the scales”.

Italo Calvino begins his memo on “Visibility” with the verses:

“Then rained down into the high fantasy…”.

”Rains the “Visibility” – or images – down from heaven; that is, God sends them to the people”.

As clarification of imagination, Italo Calvino quotes the following lines from the Purgatory by Dante:

You, imagination, that prevented us
Many times to perceive the world,
Although around may sound a thousand cymbals

What moved you, outside our sense?
A flash of light, created in heaven,
By itself, or by the will of God.

This is Italo Calvino’s testimony on literature in our Western contemporary world rooted in Christianity.