In Amsterdam I entered the inverted world of Holland and this inverted world took me on. A world with many centuries of embarrassing wealth and a deep discomfort [1], but that I learned later. For me the feast started. As an exotic outsider, I was not bothered by the discomfort and my lovers let me sharing in their wealth.

From the Harbour, I walked via the Damrak [2] to the Dam.

Earlier in the 17th century the Dam and its surroundings were the place where shiploads were traded against securities that were redeemable across the North Sea and Baltic Sea area. The traders in Amsterdam did everything to retain confidence in these securities. Still the Dutch relate the value of goods and the value of trust in human relationships to money. Money is for them still a metaphor for confidence.

When I arrived on that beautiful autumn day for the first time on the Dam, the last “Sleepers on the Dam” of that year were still present. A few years ago the police and Marines had skirmishes with the “Sleepers on the Dam”. In the opinion of the former Regents these lazy idlers were not in the position to sleep at the National Monument [4]. The text on the front of the Memorial seemed to leave the Regents in their right:

(‘Let here where the heart of the motherland is, the monument – that citizens bear within their hearts – look at the stars of God.’)

According to the Regents the solitary monument should look at the stars of God commemorating the Second World War. Intuitively the “Sleepers on the Dam” felt that the Monument is a memorial to the inner entity of the citizens to look at the stars of God. In my native region the Maasai God Engaï [6] aroused in a distant past under the night starry sky the deceased back to life. In this inverted country the “Sleepers on the Dam” temporarily won the skirmishes until the winter chased them away. In those cold days the vapour of my breath gave a home to the breath of the villager killed in the overnight fire in the forest; almost all the nights I slept under the stars when the coldness allowed.

After a few months it was freezing period; the inhabitants of this inverted world were beset by ice-fever. For the first time in my life I saw frozen water – for me a strange environment. All the other people started ice skating; for them, it was a free world with a traditional free trade [8]. Many made long skating tours through the polders, a few of them came back home wounded – in Holland very usual. 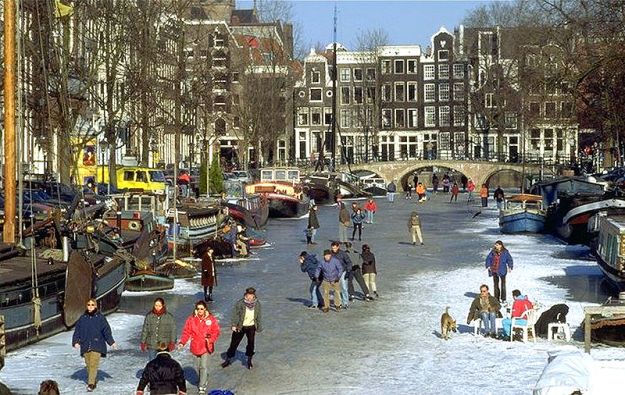 Luckily I found accommodation at the home of my lovers during this cold period.

[1] See for the richness of Holland in the 17th century: Schama, Simon, The Embarrassment of the Riches. Fontana Press, 1987

[2] The Damrak was the former outer harbour to the South Sea for small vessels. See also: http://nl.wikipedia.org/wiki/Damrak

[5] The Latin tekst on the front of the Memorial is written by dr. J.D. Meerwaldt

Today your narrator has met the first main character. The second main character is still not fully recovered. In about two weeks they may be able to resume the journey. Your narrator will continue this intermezzo for a while.

The first main character is a few weeks with his family on vacation in Brittany in France. He prepares for the second part of the Odyssey to “Who are you – a survey into our existence”. This second part is an exploration of the five common realities. His fellow traveller and he will visit the stages of science, emotions, emptiness, change/time, and interconnectedness. They will encounter ordinary meaning and madness. They will undergo the beauty and horror of our daily lives. The continuation of the Odyssey has similarities to the efforts and horrors of the separation of air and earth. It is also an exploration into our daily being. After this quest they will both be another human being: the exploration means a farewell to whom they are now.

The first main character is hesitating where to start. He has received the same advice that is given ot the narrator of the Mahābhārata – by Peter Brook [1] – at the start of that search: “Start with yourself”.

During his holiday, the first main character has visited the beaches in Normandy, where on D-day in June 1944 the landing of allied forces took place. Near Omaha Beach at Colleville-sur-Mer a cemetery of approximately 7000 fallen American soldiers is located.

In the Memorial building at this cemetery behind a glass wall, a rifle with helmet – instead of a cross – is placed in the ground as memorial for a fallen soldier. 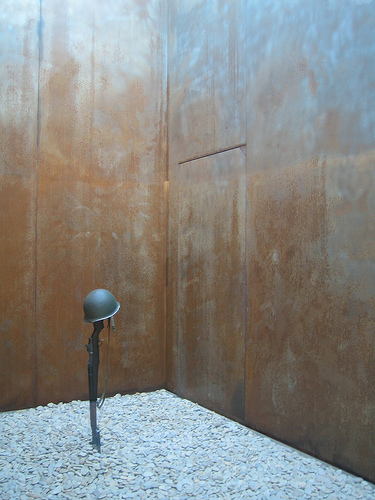 After seeing the rifle with helmet of the fallen soldier, the first main character notices the similarity between the rifle and the crucifixes when walking on the cemetery. Many cemeteries have crucifixes as headstones for deceased Christians.

During his holiday, the first protagonist read the book “The last Amateurs” about the preparation of the boat race between the University teams of Cambridge and Oxford.

The following intermezzo is about amateurs.